VitaDAO has been operating for just over a year, and as part of feedback received by working group members individually and through a series of internal discussions, we propose to re-align working group structures and governance to establish better accountability and responsibility for achieving VitaDAO’s goals, while empowering the contributors who are able to help the DAO accomplish those goals.

This proposal replaces/suggests modifications to VDP-19 / VDP-36, and VDP-34.

VitaDAO has done quite well in its first year of operations in establishing itself within the DeSci ecosystem. As part of this past year, contributors had to cope with many of the growing pains of a new organisation spanning everything from scaling dealflow, treasury management, human resources, legal, and operational challenges.

From this, it has been determined that while the current working group structure as a whole works, there is a very clear opportunity for efficiency improvements via empowering individuals or squads to execute.

We propose that VitaDAO aligns around the concept of an execution layer and a consensus layer, with various contributors empowered to varying extents based on their role within each of those layers. To that end we propose the following structures and changes:

If this proposal passes, the changes it introduces will be integrated into VitaDAO’s constitution on Discourse. Internally, the affected working groups and squads will reorganise their tools and channels accordingly, such as Discord channels and working group calls.

Ahead of the stewardship election , working group members will be invited to recommend candidates who will then be voted on by token holders. Within a month after the election, the elected stewards will appoint VitaCore members.

Absolutely thrilled to be at the forefront of innovation in DeSci with VitaDAO!

Generally in alignment with this proposal, although would like to draft a follow-up improvement on this to balance powers best towards governance/token holders vs centralizing it to a shrinking amount of stewards and rather coming up with a more empowering and less hierarchical enablement, enabling a structure similarly to the one proposed here: [Discussion] Safe DAO Resource Allocation Model (OBRA) - Governance - Safe Community Forum or that Vitalik mentioned in DAOs are not corporations: where decentralization in autonomous organizations matters

and dont think it makes sense for example that longevity + awareness dictates gov, tokenomics, fundraising etc., but rather a squad/lead forms around specific initiatives like “treasury management lead”, or “fundraising lead”, that would share specific governance proposals and drive those initiatives forward within a strategy, towards a measurable metric.

so instead of “calling upon” legal, gov, tech & tokenomics and many other streams by longevity or community, they’d be initiated via a gov proposals that drive a specific initiative within a strategy towards a goal.

instead of just stewards executing, it would be every empowered lead and squad enabled to execute within their budget, and initiative.

i’d make vitacore member appointed by gov and not stewards, same for stewards themselves.
—

best visualized in these graphics

Vitalik - DAOs are not corporations: where decentralization in autonomous organizations matters 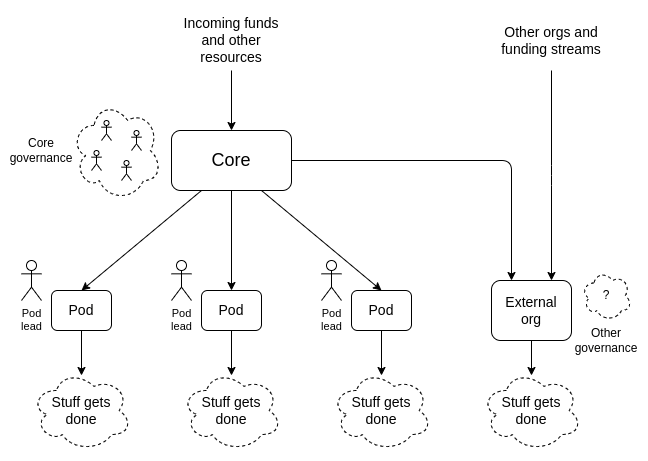 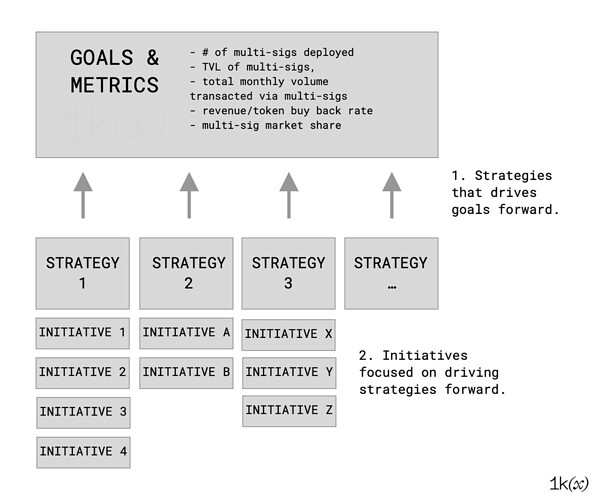